Keeping score in a relationship is, unfortunately, all too common. It becomes even more obvious when it’s the third time this week you’ve done dishes or you literally can’t remember the last time your partner initiated sex.

Why do we keep score in relationships?

Well, we can thank our ancestors for that one.

It stems from our need to prove our “worth” to the group before they decide you’re not pulling your weight and kick you out.

In a weird way, it’s a protection mechanism.

But, we don’t really face that same kind of denial anymore. Your “tribe” won’t kick you out of the cave because you suck as a gatherer. Your life doesn’t depend on you doing laundry.

So this once helpful tactic is now known as a relationship-killer and resentment-breeder.

Instead of keeping us alive, keeping score has turned into a way to prove that we’re right and you’re wrong.
We do more and you’re lazy.
We care and you don’t.

We’ve talked about keeping score in a relationship before (and how bad it is) but maybe you’re just now buying it. Maybe you truly believe that you must keep score to make sure you’re not getting jipped in this relationship.

I mean, how else are you going to justify the fact that it’s his turn to fold the laundry if you don’t have the exact amount of times you’ve done it this month alone facts to support it?

Why You Shouldn’t Keep Score in a Relationship

Well, for starters, it’s because keeping score in a relationship is very me-centered. It’s a way of looking at the relationship as a little lopsided. (a little egocentric, if you will.)

When you’re keeping score, you’re constantly looking for ways that your partner isn’t enough, isn’t contributing, or is disappointing you. You’re operating from a place of superiority, as if they owe you something.

Keeping score in your relationship literally puts you and your partner on opposing teams. I don’t know if you know this, but teammates don’t “score” on one another. Only their opponents.

Keeping score in your relationship automatically puts you in a me vs them mentality, which is not what marriage is all about.

Your partner is your tribe, your team, your home. They are the one you work with; keeping score against may make you a winner. But your relationship will be the loser, not your spouse.

Even if you wanted to keep score of your relationship, it’s impossible.

And not because it would get tiring to count the exact amounts of washed dishes, beds made, or groceries bought but because no task is made equally.

You might consistently wash the dog but your spouse is the only one to ever get the oil changed in any of the vehicles. Are these two tasks equal?

Does making dinner outweigh being the working spouse? How about waking up at 3am for the crying baby? Do you get one or three points if it’s a weekday?

Well, I hate to break it to you, but there isn’t some gamebook that breaks down these tasks into a neat and tidy point system. Their worth– all of these tasks– are based on your emotions.

So keeping score in your relationship is nothing but fictional points based off of hurt feelings and resentment.

How Do I Stop Keeping Score In My Relationship?

It’s difficult because it’s so natural. It’s basically ingrained in us at this point. But that doesn’t mean it’s impossible to stop (or at least lessen) it.

Give freely. Give happily. Give without expectation.

When you stop taking note of all the things you’re doing and they aren’t doing, you’ll look at your relationship in a whole new light.

Doing the laundry because it simply needs to get done and not because it’s going to be used as ammunition in your next fight is freeing!

And eventually, you’ll begin to enjoy serving your spouse again, which will prompt them to also want to serve you.

You’ve heard the rumor about giving in order to receive, right? Well, it works in marriages, too.

If you’re consistently giving, it will inspire your spouse to want to do the same.

(2) Open Your Eyes and Appreciate Them

When you’re keeping score, there’s a very high likelihood that you were hyper-aware of all the things you did for the relationship and forgot to notice the way they bring in the mail each day or scrape the ice off your car in the winter.

Instead of using that laser-focus to see what they aren’t doing, try your hand at looking for all the ways they do help out around the house.

Big and small, thank them for what they do.

Appreciation is one thing every human loves. Being noticed for a job well done, no matter how small or routine. It’s like the essential oil that magically takes away all those aches but you’re not sure how; all you know is that it works.

And once you start, you’ll notice that it just feels good to appreciate them. 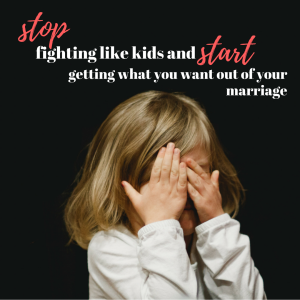 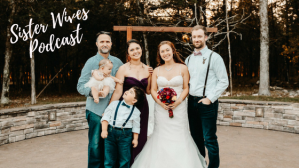 Connect with us on Twitter, Facebook,and Instagram! We’re always sharing insightful videos, relateable quotes, and funny pictures that let you know that you’re not in this alone. And that, yes, we’ve been there too!

It's happening; we're finally recording again. I know you all missed us and definitely noticed our hiatus. - - - - - - - #marriage #marriedlife #podcast #relationshipgoals #couplesgoals
Happy Mother's Day to the mom who made The Sister Wives Podcast possible and to @marieoates! (Everyone tell her she's a good mom, it's her crack) · · · · · #married #marriage #love #engaged #newlyweds #relationshipgoals #mothersday #mom #mama #iloveyou
What's the message you're sending out to the world about your marriage? Marie and I recorded a podcast yesterday talking about Kim and Kanye. Hint: it has to do with this quote. · · · · · #kanyewest #kimkardashian #married #marriage #love #engaged #newlyweds #relationshipgoals #loveisachoice #bestfriend
A relationship is a lot more than just talking-- it's about communication! Be sure to have open and honest talks with your spouse. Sometime this is the best form of intimacy a marriage can have. £ · · · · #married #marriage #love #engaged #newlyweds #relationshipgoals #talktome #communication #loveisachoice
Your spouse is your teammate. Your other half. Your best friend. Your cheerleader. Your Ron Weasley. They are not wanting to fight with you or wanting to do things to purposely put a strain on the relationship. · · Always remember that it's you and your spouse against any and all issues that come your way. · · · · · #married #marriage #love #engaged #newlyweds #relationshipgoals #love #iloveyou #loveisachoice #mrandmrs #husbandandwife
When Shawn and I first got married, I had a lot of people tell me that sage advice of "don't go to bed angry." And I used to think that was so powerful and such a good idea. But as time went on, I realized that it's not always the best advice... Especially when a fight breaks out at 10pm when you have a law school midterm the next day. · · · What I'm saying is that sometimes going to bed, walking away for a minute, or just having a "cool down" period isn't a bad thing. Rome wasn't built in a day and your fights will sometimes take more time to fix than it does to assemble Ikea furniture. · · · Fighting and being mad isn't fun, but it doesn't have to be painful. Learn your Anger Dance, know when you both need a timeout, and be ok with the fact that not every fight will be resolved before your head hits the pillow. (maybe some sleep is all you need to finally FIX the fight.) · · · · · #married #marriage #love #engaged #newlyweds #relationshipgoals #fights #fighting #angry #love #iloveyou #loveisachoice
%d bloggers like this: